Matt was with the California based Ultimate Fabrication team this weekend at the Sonoma Raceway for the NASCAR K&N Pro Series West, Carneros 200. The small, Rob Dixon lead team, fought hard against the larger operations resulting in a 10th place finish.

After missing most of the first practice session on Friday morning due to a transmission failure, the team worked quickly to make the necessary repairs. In the second practice session, the team made great gains to dial the car in to prepare for a respectable 14th place qualifying effort. 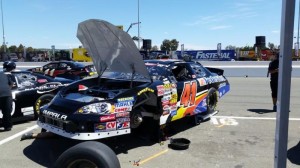 In the race, Matt had worked his way up to 11th position at the mandatory mid-race break by keeping pace with the leaders, while conserving his equipment for the second half of the race. Unfortunately, a questionable penalty was assessed the team on the break, and Matt had to start the second half of the race in 25th position on the track. Matt charged his way back through the pack to the 9th position before a green-white-checkered finish. On the restart, Matt dodged several cars that were making contact ahead of him and finished in the 10th position.

“I really want to thank Rob and the team for their all their hard effort”, Matt stated. “It’s pretty hard to go up against the big teams and experienced road racers, and I think we did a pretty good job. ” Also, I want to thank Federated Auto Parts for coming aboard for this race. It was great to meet all the distributors and store owners and customers in the Bay Area. ”

Matt’s next event is a NASCAR K&N East race with the Ken Schrader Racing Team at New Hampshire Motor Speedway on July 11.