“This is a great opportunity for us to thank the all the men and women working with Clinical Research Management and highlight their fight against Ebola. Although it may not be as prevalent in the media today as it was a couple months back, it still remains a dangerous disease in so many parts of the world and my sponsor and their partners are doing everything to fight back and bring potential treatments to those in desperate need,” commented Tifft.

“It’s pretty easy to lose your cool at Martinsville,” said Tifft. “Its tight racing and not very uncommon to see drivers get ticked-off. It’s a lot like bumper cars at times – the key to success here is being smart and finessing the truck around the track and being aware of your surroundings. As a kid it was always my favorite track to watch and now it’s one of my favorite tracks to race.”

ClinicalRM has been part of a large effort in West Africa to fight the Ebola Virus epidemic. Although currently on the decline, the Ebola virus disease remains a concern and is a serious, life-threatening disease with a high rate of fatality. Many partners continue to make this a priority to proactively halt the potential for new outbreaks in other countries.

In partnership with ClinicalRM, Tifft’s truck design will honor and include the following groups whose efforts assisted in the fight against the spread of the Ebola virus: 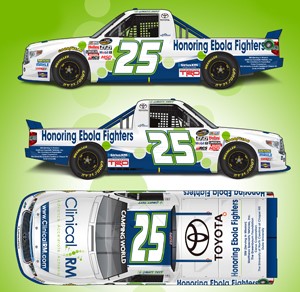 Tifft, also a University of North Carolina at Charlotte freshman, will make his fourth career NCWTS start and second consecutive effort with VMS. After qualifying 16th at Daytona, Tifft settled for a disappointing 19th place finish after getting caught up in a mid-race incident which knocked him out of competition early.
The Kroger 250 will air live Saturday, March 28th on FOX SPORTS 1 and MRN starting at 2:30 p.m. EST.

Founded in 1994, ClinicalRM is a full-service Contract Research Organization
specializing in preclinical through Phase IV support of clinical trial services
for biologics, drugs, and devices. Through international partnerships and a
global selection of sites, they support their customers with a wide array of
research, regulatory, and sponsor services that are tailored to accommodate
clinical trials globally. Spanning the government, academic, and commercial
marketplaces, ClinicalRM’s multi-therapeutic team consists of leading experts
in the fields of Infectious Disease, Vaccine Development, and
Neurotherapeutics. ClinicalRM’s goal is simple – to assist in improving the
quality of life in communities throughout the world by advancing the goals of
their customers.

Venturini Motorsports (VMS), fielding cars for over 30-years in the ARCA Racing
Series presented by Menards, is one of the premier NASCAR driver development
programs in the country. Multiple team championships and consistent on-track
success, VMS has evolved into one of the most recognizable names in
motorsports. Since 2007, VMS has assisted in the career development of notable
NASCAR drivers such as Joey Logano, Justin Allgaier, Ryan Blaney, Alex Bowman,
Brian Scott, Kevin Swindell, John Wes Townley, Erik Jones, and Justin Boston.
Over the years the Venturini name has become synonymous with modern-day racing
in America. In 2012, the Venturini family was inducted into the National Italian
American Sports Hall of Fame (www.NIASHF.org)
and now find themselves enshrined with such sports icons as Joe DiMaggio, Mario
Andretti, Vince Lombardi, Tommy Lasorda and Rocky Marciano.