Tifft will run a six-race schedule and share the driving duties behind the wheel of his Tundra with KBM owner-driver Kyle Busch and Joe Gibbs Racing (JGR) driver Daniel Suarez, competing for the Truck Series Owner’s Championship. KBM also announced the addition of Justin Boston to the team on Friday.

Tifft has made 12 ARCA Racing Series starts the last two seasons, registering six top-five and eight top-10 finishes. The Ohio native registered a career-best runner-up finish in this year’s September event at Kentucky Speedway in Sparta. In addition to his time in the ARCA Racing Series, the 18-year-old has competed in the NASCAR K&N East and West Series, posting one top-five and nine top-10 finishes across 24 starts.

The University of North Carolina at Charlotte freshman has competed in two of the last three Truck Series races this season, including an eighth-place finish at Martinsville (Va.) Speedway in September, and is entered in the series finale at Homestead-Miami (Fla.) Speedway this weekend.

“The opportunity to drive Toyota Tundras for Kyle Busch Motorsports in six Camping World Truck Series races next season is one that I’m extremely proud of being provided with,” Tifft said. “KBM is such a well-respected team in the Truck Series and I’m excited to be able to go out next year and prove what I can do behind the wheel of top-notch equipment. I’m confident that this part-time schedule will allow me to showcase my abilities as I work towards securing a full-time opportunity for 2016.”

“Adding (Matt) to the driver lineup at KBM next season gives us the opportunity to compete for the Rookie of the Year honors with Justin (Boston), a Driver’s Championship with Erik (Jones) and the Owner’s Championship sharing a truck between Matt, myself and Daniel,” Busch said. “Matt knocked on the door of victory a couple times in the ARCA Series while running a part-time schedule and had a nice run in his Truck Series debut at Martinsville last month. We’re looking forward to seeing him behind the wheel of our Tundras next year.”

Announcements on truck numbers, sponsors and crew chiefs for KBM’s teams in 2015 are forthcoming. 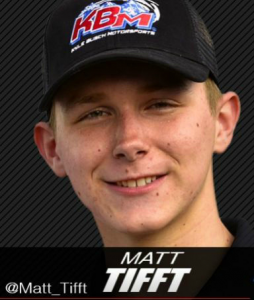