By Chris Knight and Catchfence.com 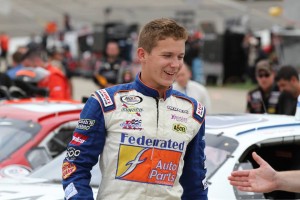 Not only was the part-time ARCA Racing Series presented by Menards driver competing at one of the most demanding tracks on the circuit, but the Buckeye native was competing with a relatively unknown team. None of that mattered though in Saturday’s Kroger 200, as Tifft, who competed in the full NASCAR K&N Pro Series East schedule last year, burst onto the tour with sheer determination and a resilient effort.

So, just how much did the hard work pay off? When the smoke cleared from winner Darrell Wallace Jr’s fourth career victory and the dust settled on pit road from on-track skirmishes, Tifft’s sponsorless No. 0 Chevrolet Silverado boasted an eighth-place finish.

For some though, the impressive run by the teenage short-track talent isn’t surprising. The 18-year old has proven that he has the talent, feel and finesse to earn the rightful attention of his onlookers. And while some of the finishes haven’t exactly panned out, he still made the most of every opportunity, including his time spent ARCA Racing for the legendary racer Ken Schrader. In 10 ARCA starts this season, Tifft rallied seven top-10 finishes, including a career-high second at Kentucky Speedway last month. Furthermore, the driver of the No. 52 Ken Schrader Racing Chevrolet was leading in the season finale at Kansas Speedway, when debris cut down his tire and sent him hard into the outside wall. With that experience aside, fast forward to now.

Tifft can now let his entrance to the NASCAR Truck debut sink in and hope it will pave the road to an (even) brighter future. “It’s pretty crazy, honestly,” said Tifft. “We were just trying to finish all the laps in this deal. Our goal was to finish inside the top-15. We got a bit off sequence, strategy wise at first, which didn’t work out with our long run we had. Had to dodge a bunch of wrecks, which got crazy at times, but just tried to stay smart and calm, which ultimately worked out.” “This is definitely a huge accomplishment. I can’t even begin to explain it, but we proved that with luck on our side, big things can happen. Today (Saturday) was a big deal.”

Tifft entered the penultimate short track race of the season, opting to fly under the radar, but after their pit strategy cycled through, clearly their objective to be in stealth mode was no longer an option. And it’s not only Tifft’s humble demeanor, but running on a limited budget, with no sponsorship and a somewhat clouded future, that’s put the freshman at UNC Charlotte on the radar enough to earn a worthy look by his competition next time, as he’s expected to compete in the next-to-last race of the year at Phoenix (Ariz.) International Raceway on November 7.