Greatest achievements in racing: Achieving my goal to race in the NASCAR Monster Energy Cup Series

Embarking on his second year in the NASCAR XFINITY Series, Matt Tifft will join Richard Childress Racing for the 2018 season, piloting the No. 2 Chevrolet Camaro for the team. Randall Burnett will serve as crew chief for the Hinckley, Ohio native in his first year with RCR.

Tifft got his first experience behind the wheel in the fall of 2007 when he competed in a go-kart race at Barberton Speedway in Norton, Ohio. In the next two years that passed, Tifft was mentored by Gary Lawson and would go on to compete with Beasley Motorsports in both divisional and national go-kart races. After scoring two national level victories in 2009, Tifft began focusing on super late model racing on both asphalt and dirt surfaces.

During 2012, Tifft competed in the ARCA Midwest Tour, earning a fifth-place finish in the standings and the series’ Rookie of the Year title. In addition to ARCA, Tifft also began dabbling in the NASCAR K&N Pro Series East in 2012 and 2013.

In 2014, Tifft joined Ken Schrader Racing in the ARCA Racing Series, earning six top-five and eight top-10 finishes in just 12 starts, including a career-best runner-up spot at Kentucky Speedway. Tifft also made his NASCAR Camping World Truck Series debut, finishing eighth at Martinsville Speedway in September 2014. He would go on to compete in two additional Truck Series races before the end of year.

The 2015 season saw Tifft compete in 12 NASCAR Camping World Truck Series races, capturing five top-10 finishes, along with a handful of ARCA events. The driver also made his NASCAR XFINITY Series debut with Joe Gibbs Racing at Kentucky Speedway, in which he finished 10th.

In June of 2016, Tifft was sidelined after being diagnosed with a low-grade brain tumor that was discovered during treatment for a disc condition in his back. Tifft underwent surgery to remove the tumor and made an extraordinary return to racing 11 weeks later in September 2016. Tifft has since become a spokesperson for the National Brain Tumor Society.

Tifft competed full time in the NASCAR XFINITY Series for Joe Gibbs Racing in 2017. He collected two top-five and 13 top-10 finishes before making the Playoffs and finishing seventh in the standings during his rookie campaign.

2018 was an incredible year for Matt with Richard Childress Racing. He achieved 6 Top 5’s, 19 Top 10’s and a pole on his way to finishing 6th in the overall point standings.

In 2019, Matt makes the jump to the Monster Energy Cup Series with Front Row Motorsports.

View more on our social feeds by clicking below 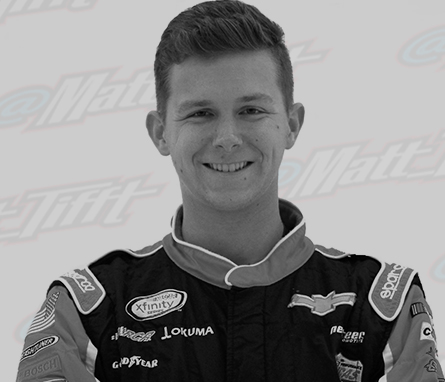